Investment Banking: Managing Your Team in Times of Change 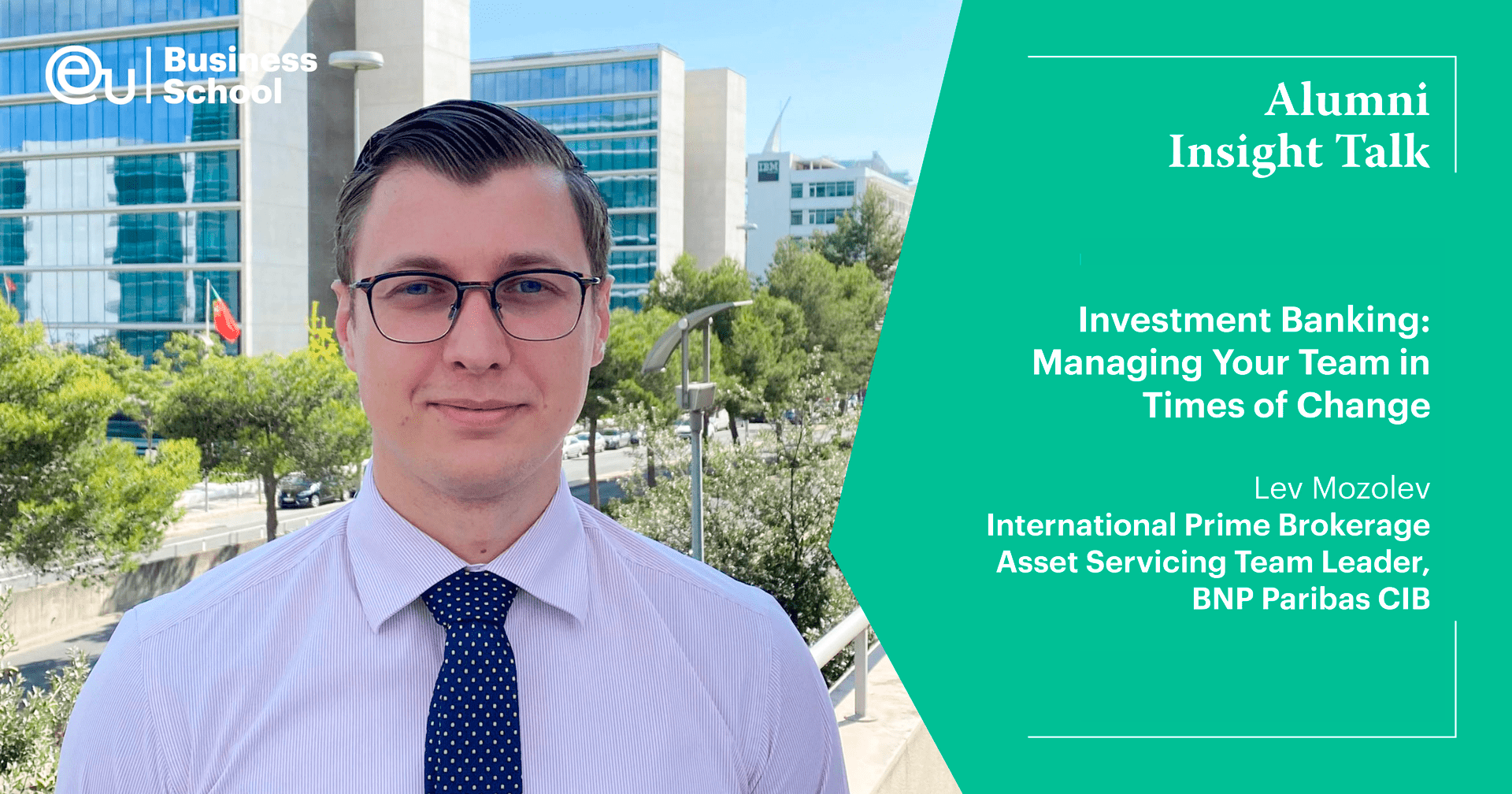 Lev Mozolev has forged a successful career in investment banking since graduating from EU Business School in 2015. Originally from Russia, Lev is now based in Portugal, working for the international bank BNP Paribas. Lev is well-suited to an international career given his extensive language skills; he speaks English, Spanish, Portuguese and Russian.

His career with BNP Paribas started one year after graduation. Lev began as a Corporate Action Analyst in Security Services. He spent two years in this role, taking on many projects and participating in various task forces. He then moved to the brokerage side of the business, working as an Asset Servicing Analyst as his department moved from Paris to Lisbon.

During his time with BNP Paribas, Lev has been promoted frequently. At the moment, he holds team-leading and auditing positions. During his presentation, he shared lessons learned from his experience of becoming a team leader during the Coronavirus crisis of 2020. Although this period was complicated for most people, Lev faced additional pressures as he oversaw the work of ten employees and managed a critical company transition.

Because BNP Paribas had just acquired a brokerage business from a Dutch bank, Lev was responsible for supervising the platform migration process. His job was to ensure that the operational activity of the business aligned with that of BNP Paribas. This was a new challenge, and he had to face it in extraordinary circumstances. How he did so was the focus of his presentation.

Many industries were unprepared for the sudden announcement that their employees must start working from home, but the banking world faced unique difficulties in implementing this order. Although BNP Paribas had been exploring the future of remote work before the pandemic struck, their plans were based on a 5-year timeline. Coronavirus shortened that timeline to less than a month.

Investment banking entails high-security measures, which added a layer of complexity to the transition between the office and remote work. Lev shared that BNP Paribas’ first step was to develop a plan that minimized risk by diversifying responsibilities. While the plan was being created, teams were separated so they could work safely from different buildings.

The shift to working from home was more gradual for the bank than for other industries. This was because it was impossible to implement with immediate effect. First, decisions had to be made regarding rights to information. Then, each entity had to have the correct level of access approved so they could continue their work without the possibility of dangerous security breaches.

One of the most practical reactions the bank had to the pandemic was to give each employee a laptop to work from. This required investment, as employees usually worked from desktop computers in the office. These steps had to be taken with urgency, but given the nature of their work, the leadership at BNP Paribas couldn’t proceed without careful planning and attention to potential risks.